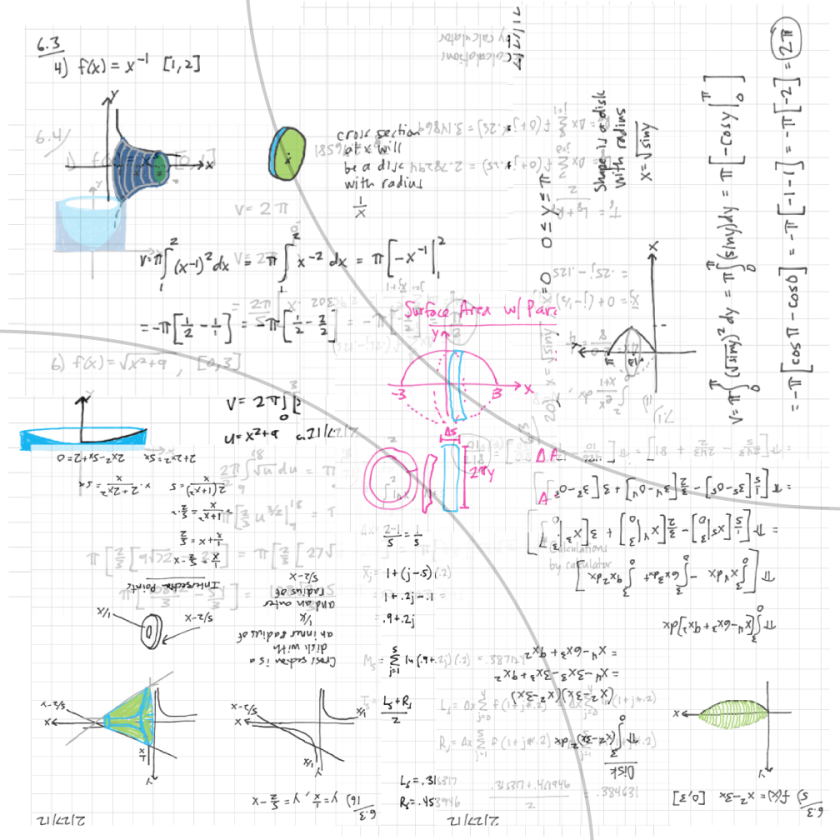 Yes, my life is all about math and cats. Here is another cat I’ve finished making. This one is for a friend of mine who likes green. :)

I have one cat for sale in my Etsy shop here: http://www.etsy.com/shop/ArtByKristinBell.

And I’ve made a new Calculus fabric out of my math homework and uploaded it to spoonflower.

Here’s my shop on spoonflower: http://www.spoonflower.com/profiles/kristinbell

OMG I was so excited when someone bought one of my fabrics! You have no idea how thrilling it is!!!

I’m quite a boring person…obsessed with making cats and doing math homework! hehe. Thank god the anxiety has calmed down quite a lot, so I can go about my business and get stuff done!!! What a relief! :) :) :) 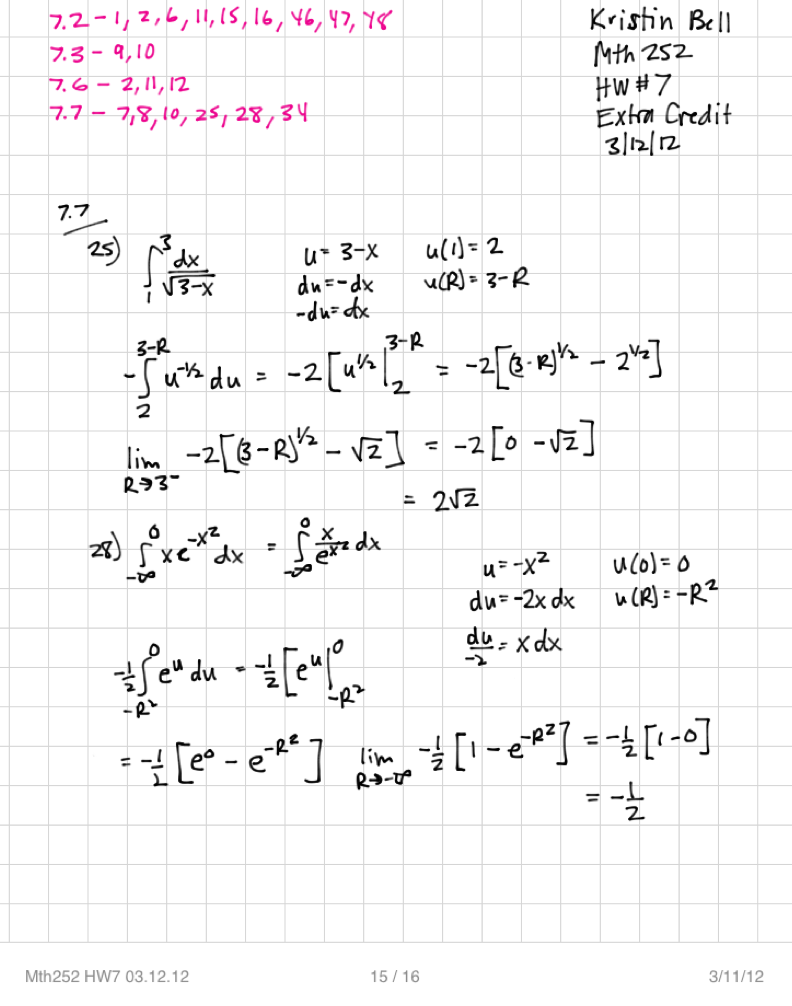 Here is another Calc 2 example for those who are interested! I have my final on Monday! FRIGHTENING! Then next term it is on to Calc 3 & 4!!! Wheeeee! :)

Yep, I’m still taking Calculus. On our last homework we were learning about measuring volume by rotating small sections around the x or y axis. Here I am demonstrating use of what they call the “Shell Method.” It seems a little easier to me than the Disk or Washer method. But then again, I guess it depends on the problem! lol

A study performed by Hui-jie Li et. al. based in Beijing, China and published in Schizophrenia Research vol. 134 (2012) tested 12 patients with schizophrenia for facial emotion processing. In the study, 12 of the non-ill siblings of the patients were also tested along with a control group of 12 people who were matched for demographic variables like IQ, age, gender, and education levels.

The researchers were especially interested in evaluating whether or not the patients with schizophrenia had deficits in facial emotional processing like other studies from Western populations have indicated. In essence, this was a replication study paired with a cultural component to test if facial emotional processing deficits are universal or not.

The data obtained from 8-minute fMRI scanning sessions where participants were shown 20 happy faces, 20 fearful faces and 20 neutral faces (at different times with different time intervals) were analyzed and it was found that the patients with schizophrenia showed abnormal activation of the “social brain neural circuit.” In addition, the sibling participants showed slight abnormalities that fell between what the patients with schizophrenia displayed and what the control group displayed. This result led researchers to hypothesize that there might be a deficit even in the non-ill siblings that the patients’ brains are trying to compensate for. 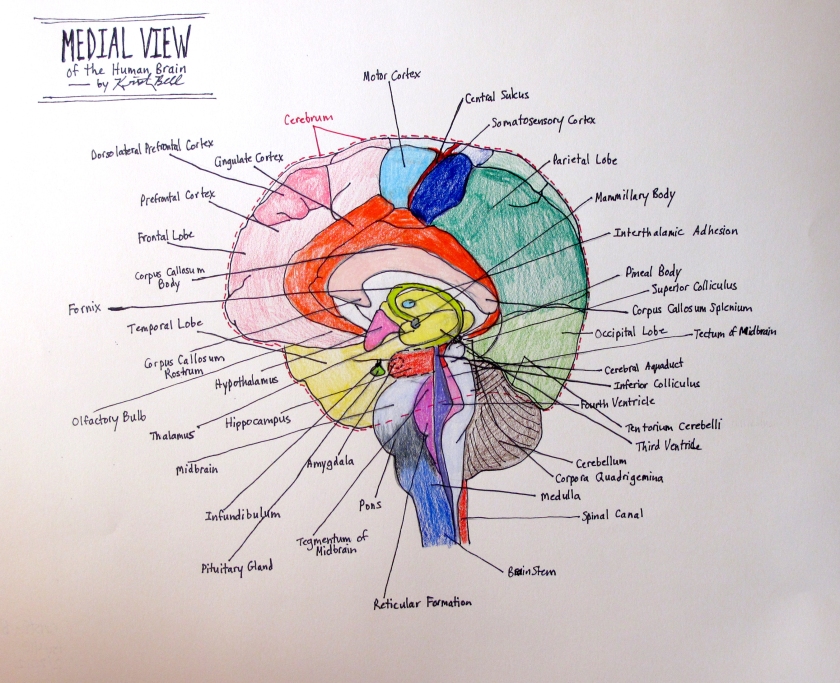 I’m not quite sure if I got all of the parts in the right spots for this one. It is pretty hard to draw from multiple images and get everything in one pic. This is supposed to be the medial view of the human brain. :) Click the pic to enlarge.

I’m very pleased to report that this last term at school went great! I took the first term of Calculus and Intro. to Linear Algebra and got A’s in both classes! I also had a really good time with the classes. I had great teachers too! I have seen a real improvement in my ability to actually get to classes because of my bipap sleep machine and have seen an even greater increase in my ability to do homework and concentrate since I started taking Abilify last January. Doing well in school has always been important to me, but because of my schizophrenia and sleep problems I have had a lot of issues with being able to attend and get through classes.

When I first became ill when I was 15 my grades really suffered. For the first time in my life I wasn’t a straight A student which was quite disheartening. The last two terms in school I have been feeling a lot like my old self for the first time since I was 15!!!

Anyway, this last term was great and a real ego booster! I just hope I can keep up the success! :)

“Major Problems In the History of American Families and Children” edited by Anya Jabour is one of the books in the Houghton Mifflin ‘Major Problems in American History’ series. The book is a tremendous resource of both primary source documents and academic writings on the subject of American families and children. The book helps to train college students to look for primary sources and how to evaluate those sources by providing examples of discourse related to many of the primary sources in the book. The primary sources in the book are interesting and provoked further exploration of topics which include families in bondage, Native American, Victorian, frontier, Civil War and immigrant families to name a few. It also tackles the case of orphans, families of the 1950’s, the welfare system and late 20th century family politics. An example of what a good textbook should look and operate like. Bravo! (