In the United States in the past week we have been shocked and devastated by public shootings. First in Oregon at Clackamas Town Center, then in Connecticut at an elementary school and then in Las Vegas at a hotel. Most people, myself included, are horrified at the violence. Naturally, we now all seem to be debating about how to prevent these senseless acts. Some people latch onto gun control, some people latch onto our violently oriented culture, and some people latch onto mental illness as an issue. I honestly don’t know that there are any answers or actions that society can make as a whole to prevent things like this happening in the future, but this bit of rant is not about answers exactly. What I want to talk about is what is NOT the answer.

What is NOT the answer is scapegoating any one group of people. From my perspective as a person living with mental illness, I am (of course) sensitive to people ranting about how the mentally ill should be locked up or about how all of the shooters must have been mentally ill. Honestly, we don’t know enough about the situations or people to comment. What I have to say time and time again is that statistics bear out the fact that mentally ill people are generally not violent and are, in fact, more likely to be the victims of violent crime than the perpetrators of violent crime. People with mental illness are often more of a threat to themselves than to anyone else. Even if all of the shooters turn out to be mentally ill, that does not mean that all people with mental illness are violent. We can note also that all of the shooters were male, but that doesn’t mean that all men are violent and that all men should be locked away from society or have their rights stripped.

It is distressing to me that so often the conversation will turn into attacks on mentally ill people aka “the crazies” and how to keep them away from “the rest of us.” There are literally millions (or more) people living with mental illness who never harm anyone. If someone is violent AND mentally ill, that does not mean they are violent BECAUSE they are mentally ill. They are violent, because they are violent. We should focus our energies on how to make the world a less violent one with people who are less violent, not perpetuate stereotypes and attack other humans who have done nothing wrong. 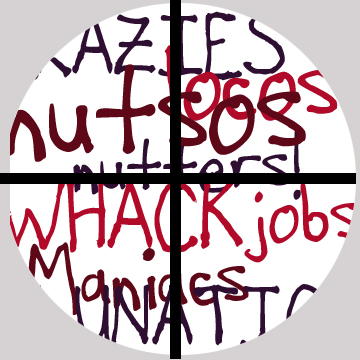 *the pic is a high school yearbook pic of the shooter, Jared Lee Loughner, that was posted at ajc.com

*** Update 1/9/2011 to Clear Up Confusion:  I am in no way advocating that the shooter be given a free pass and let go to go out and commit more killings. That is not what this post is about.***

The dust has not yet settled in the horrific shooting in Tuscon, Arizona where many people were injured and several were killed by a gunman who open fired on a group gathered outside a Safeway to participate in a meeting with Congresswoman Rep. Gabrielle Giffords, D-Ariz. Already people are lining up on each side of their political fence to throw the blame at one another for inciting violence in “the crazies,” but what I fear will probably be lost in all of this is that it probably has nothing to do with politics and more to do with a lone shooter who was most likely mentally ill and set adrift in a gun-toting culture of violence that doesn’t want to deal with the “problem” of mentally ill people, let alone the stigma of it all.

If it turns out that the gunman is mentally ill, there will likely be no discussion about the real issues related to mental health care for people who are seriously ill, and the media will again brandish a VIOLENT person as a representative of what mental illness is. I checked out what is reported to be the gunman’s youtube page: Classitup10 who is supposedly Jared Lee Loughner and his videos are filled with the kind of nonsensical, paranoid ramblings classic in mental illness, especially untreated schizophrenia. If these are in fact his videos, and if he is mentally ill (which is all conjecture at this point: Jan. 8, 2011, 3:30pm), I wonder and fear how this will play out in the media and how it will play out in the courtroom.

Of course, my sympathies are for the people killed and injured and their families, but it would also be tragic if this entire situation was blown up into a political football that people just pass back and forth. If we could come to learn more about the real reasons for violence in our society and possibly learn something real about mental health care and stigma, perhaps all would not be lost. I am not crossing my fingers though.

* below is another pic from the same source of Jared Lee Loughner in 2010.